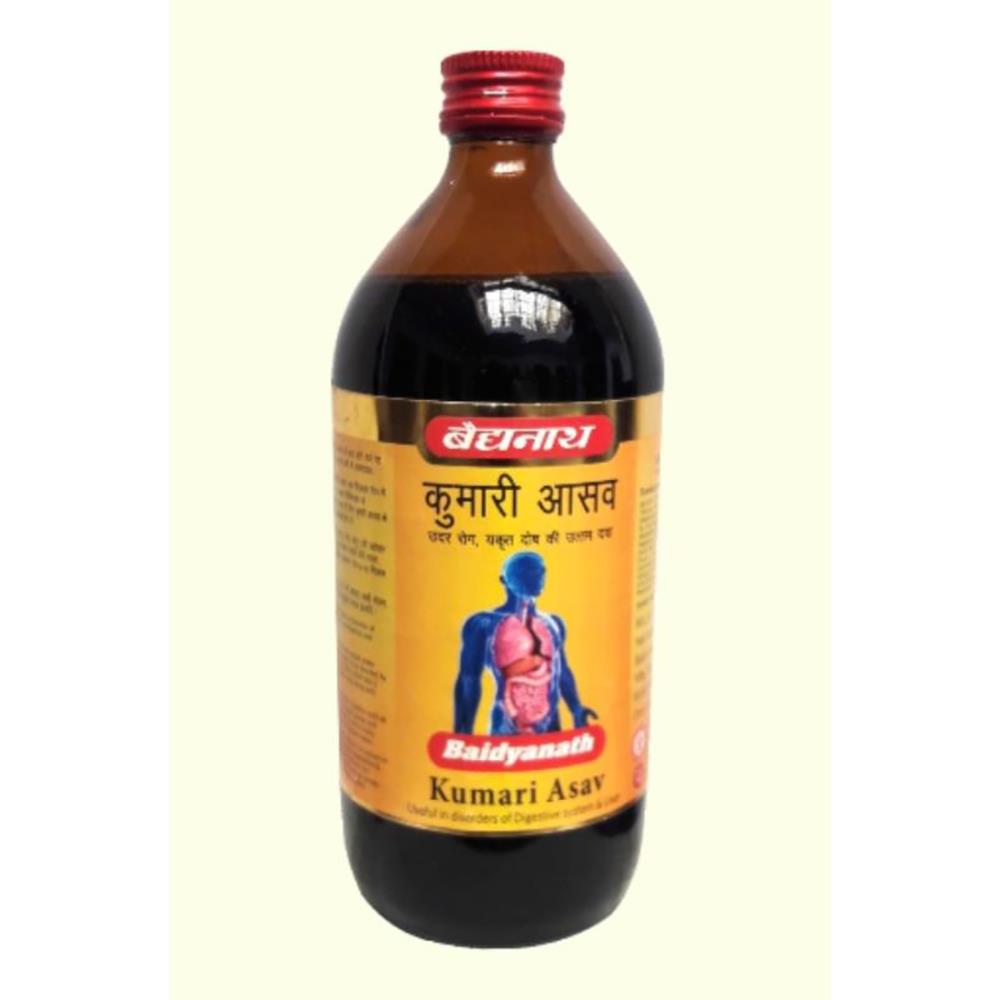 It is also known as Kumaryasava, Kumari Asava No. 1, Kumari Asavam, and Kumari Asava. Kumari Asava is a liquid Ayurvedic medicine used to treat conditions such as gastritis, urinary tract disorders, and others. It contains 5–10% self-generated alcohol.

An alcohol content of not more than 10% and not less than 5% that is self-generated in the preparation over time characterizes Kumari Asava, a fermented liquid preparation made with the ingredients listed in the following formulation composition.

As a detoxifier and anti-toxin, Kumari Asav works against AMA (toxins), making it useful for treating all illnesses brought on by AMA buildup and increased production in the body.

The secretion of digestive juices also stimulates appetite and makes a person feel hungry. Kumari Asav also acts on the mind and nervous system, stimulating the release of bile into the intestine and promoting digestion.

It boosts cravings for food and increases appetite.

It should be noted that the patient should not have any problem listed in the contraindications; otherwise, it should not be given. In general, all Asava and Arishta preparations are recommended to take after meal, but Kumari Asav should be taken 30 minutes prior in cases of poor appetite and loss of desire to eat.

However, because of its gentle stimulant action on peristaltic movements, Kumari Asav can occasionally cause mild abdominal cramps during bowel movements. However, it can also lessen dull pain if it is brought on by intestinal gas and increased Kapha Dosha in the abdomen, which can be determined by examining the symptoms below.

Before prescribing Kumari Asav, it’s crucial to make sure the patient has no epigastrium or abdominal tenderness, gastritis, heartburn, or other pitta symptoms because these conditions will make the pain worse; in these situations, Kamdudha Ras is the ideal medication.

For better results in Fatty Liver Syndrome, it can be used in conjunction with other treatments such as Kumari Asav.

When linked to hepatic steatosis, Kumari Asav is also helpful for shrinking the size of the liver and may function similarly to how fatty liver was treated above.

As it regulates liver functions and increases the flow of bile from the liver and gall bladder to the intestine, Kumari Asav acts on peristalsis and appears to be a mild stimulant laxative as well. Because its effects are long-lasting due to the modulation in liver functions, it can help with chronic constipation.

Both children and adults can use Kumari Asav for this purpose; the dosage should be 5 ml in children and 10 ml in adults twice daily after meals. It helps to clear the lungs and reduce cough attacks by making the accumulated mucus thinner and aiding in the expulsion of the thick sputum with cough.

Given that Kumari Asav is contraindicated in piles that bleed even occasionally, it is important to carefully examine the patient and review his medical history.

It also relieves symptoms of pain and discomfort in non-bleeding piles by reducing the hardness of the hemorrhoidal mass and by reducing AMA (toxins), which are thought to be the root of piles in ayurveda.

As a detoxifier, anti-toxin, and AMA PACHAKA, Kumari Asav helps to reduce AMA and relieve symptoms like joint inflammation, swelling, and stiffness. Stiffness with swelling and poor appetite are two primary indicators to use Kumari Asav. Rheumatoid arthritis is similar to AMAVATA in ayurveda. This condition occurs due to accumulation of AMA (toxins) in the body.

In contrast, Ashokarishta is beneficial if bleeding is heavy. Kumari Asavi is given in dysmenorrhea (painful periods) if there is no Pitta symptom present in the patient and if patient has less bleeding and scanty period.

Side Effects of Kumari Asav

This side effect occurs when Kumaryasava is taken in high doses, or more than 50 ml per day; however, if patient has Pitta Body Type or other pitta conditions, then this side effect can also occur with lower dosage as well. However, it is used in the management of piles, but it is contraindicated in bleeding piles and other bleeding disorders.

Although a very uncommon side effect of Kumari Asav, mild abdominal cramps or pain during feces may occur when taking this laxative.

When taken in excess, Kumaryasava may make the bladder and urethra feel uncomfortable.

Additionally extremely uncommon, this side effect only happens when taking high doses.

Given that Kumari Asav has an emmenagogue effect, which can cause bleeding and miscarriage, it shouldn’t be taken while pregnant.

It should only be consumed while lactating if an ayurvedic doctor advises it for your particular health situation.

The following medical conditions are not suitable for and should not be taken with Kumaryasava: