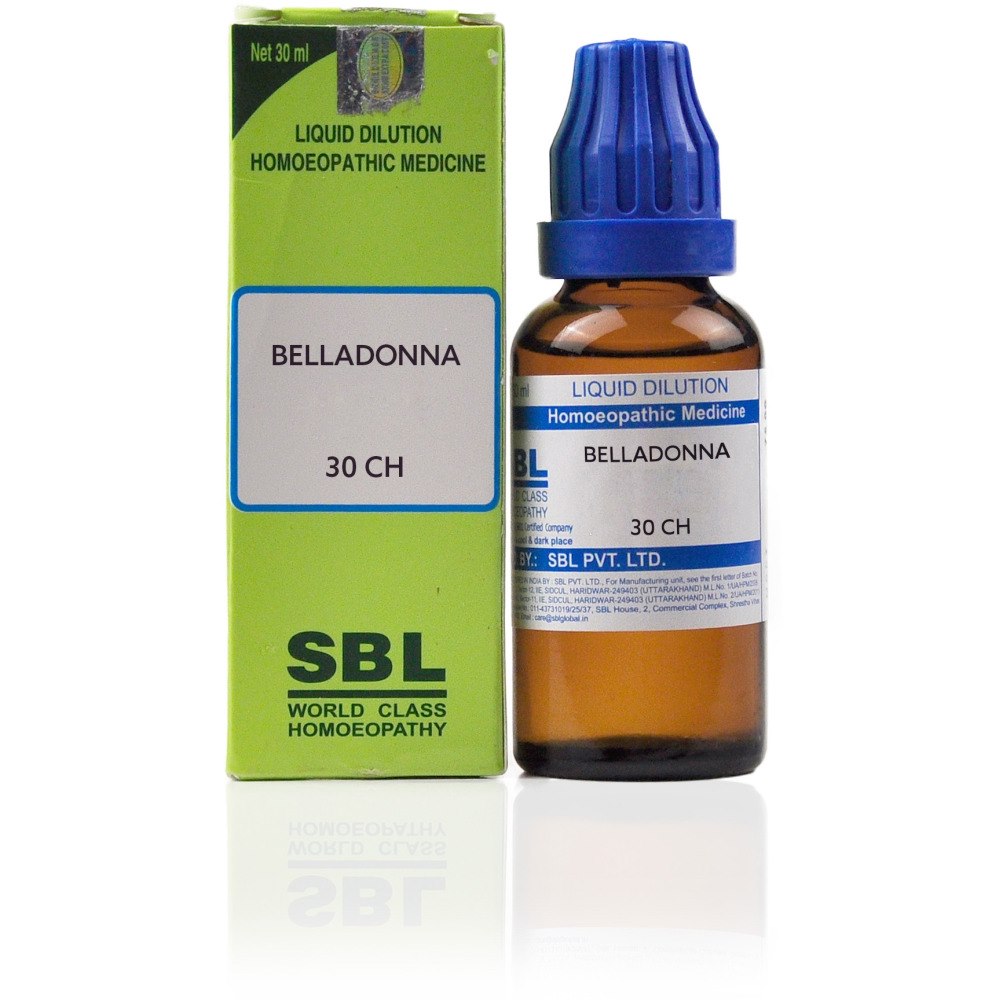 Belladonna is beneficial in treating any other inflammatory condition such as tonsillitis, appendicitis, conjunctivitis, meningitis, rheumatism, etc. There is stupefying stunning pain from neck to head with heat and pulsation, head is inclined to bend backward, boring the head into the pillow, spasmodic distortion of face and lips, grinding of teeth, with inclination to bite.

Belladonna is effective in treating vertigo brought on by stooping or rising after stooping or changing positions, as well as headaches brought on by cold or heat from the sun, from haircuts, sudden and violent headaches, intense periodical nervous congestive headaches, rush of blood to the head with pulsation of cerebral arteries, and jerking headaches worse from slight motion, jar, noise, light, touch, or lying down. Belladonna also helps in

Belladonna is also effective in treating pain from gall stones, nausea, vomiting after eating and drinking, tremor and stammering speech, great dryness of throat with redness and burning, worse on right side, cervical glands are suddenly inflammed, and mouth is dry with or without thirst.

Additionally, belladonna is helpful for skin conditions like boils and acne. It is effective for boils in the early stages before pus forms, when there is redness, swelling, and heat on the affected area, as well as when the skin is dry, hot, and burning.

– Frequently a balance of emotions, including fits of rage, etc.

– Anger outbursts that come on suddenly.

– Bangs his head against a wall.

– Intent on running away and hiding.

Patient experiences intense feelings and vivid imaginations. He lives in his own world, oblivious to the realities around him because he is preoccupied with specters and visions.

A variety of visual hallucinations swarm around him and come from within, despite the retina’s insensitivity to real objects.

He experiences hallucinations, sees monsters, and hideous faces. He also experiences delirium, frightening images, and terrifying rages that cause him to bite, strike, and otherwise act out in a crazed manner.

Perversity with tears, loss of consciousness, reluctance to speak, acuteness of all senses, and changeability.

The RIGHT SIDE is worse.

The worst motion, noise, and touch.

– Worse Draft; after getting too hot, it gets cold.

– Pressure is better while lying on the abdomen.

– HEAT IN THE HEAD AND COLD EXTREMITIES.

– Glistening eyes and an odd gaze.

– Have hallucinations and delirium easily.

– Long for LEMONADE and LEMONS.

Worse turning in bed and head movement during vertigo.

– Headache that feels like it is about to explode due to high blood pressure.

Palpitations and labored breathing in the head

– Hair splits, is dry, and falls out; headache is worse on the right side and when lying down; after-hair-cut complications, such as colds, etc.

– Deep eye-thumping while on the couch.

– Squinting, diplopia, and lid spasms; the appearance of fire in the eyes.

– Eyelid swelling, a sensation of the eyes being partially closed, and a congested fundus

– Right side otitis is worse; the pain is intense.

Right ear ringing and humming are symptoms of Menniere’s disease.

– External and middle ear pain that is tearing.

– The injected and enlarged tympanic membrane.

– Otitis media. Debilitating pain from the ear causes the child to cry out while they are sleeping. The pain is intense and beating in time with the heartbeat.

– Autophony, which is the sensation of hearing one’s own voice in one’s ear.

– Irritation in the tip of the nose, redness, and swelling.

Gumboil. Teeth pain that is dry and throbbing.

Strawberry tongue, swollen, painful, and with red edges on the tongue.

– The face’s muscles are convulsing, the upper lip is swollen, and it is red, bluish-red, hot, and shining.

– Muscle twitches and a flushed face caused by facial neuralgia.

– Right-side worsening of the tonsillitis.

– The right side of the body is more red and feels dry, as if it were glazed.

– A lumpy sensation, a dry, constricted feeling in the esophagus, throat spasms, a persistent desire to swallow, and a scraping sensation.

– Back pain that radiates; lying on the stomach is better.

– Constriction and spasmodic pain radiating to the spine in the epigastrium.

– Uncontrollable vomiting, a fear of drinking, and spasmodic hiccough

– Appendicitis; pain made better by lying on the abdomen; pain made worse by light touch.

– Pain as if a hand were clutching it; worse, a jar or pressure. Distended, hot, tender, and swollen.

– Extreme sensitivity to touch, bedclothes, etc. – Cutting pain across; stitches in left side of abdomen; pain when coughing, sneezing, or touching it

– Backache makes the piles more sensitive, and there is stinging pain in the rectum.

Urine that is scanty, has tenesmus, is dark and turbid, and is highly phosphate-loaded. Retention. Acute urinary infections.

– Haematuria, which is when there is blood in the urine but no obvious pathology.

– Hypertrophy of the prostate.

– Sensitive downward pressure, as if the viscera would all protrude from the genitals.

– Dragging around the loins, vaginal dryness and heat, and sacral pain.

Menstruation increased; it was bright red, premature, and excessively abundant. Menstruation and lochia were both extremely unpleasant and hot.

Cutting hip-to-hip pain, labor pains that come on suddenly, redness around the nipple, and mastitis pain that radiates in throbbing, crimson streaks.

– Dryness in trachea, larynx, nose, and feeling of soreness in the larynx.

– Cough with left hip pain, a whooping cough, a barking cough, stomach pain prior to an attack, blood expectoration, and chest stitches.

– Cough, high, piping voice, and very painful larynx that feels like a foreign body is inside of it.

Every time you breathe, you moan.

– The right side is more affected by mastitis (breast gland inflammation).

– A violent palpitation that echoed in the head and was accompanied by labored breathing.

– Body throbbing and palpitations with the slightest effort.

Heartbeat was swift but weak, and it seemed excessively large.

– Swollen, red, shining joints with shooting pains down the limbs.

– Swollen glands in the neck, a stiff neck, and a splitting pain in the nape of the neck.

– Dorsal pressure causes the most discomfort.

– Talking or snoring while asleep.

Dreams of falling and awakens unexpectedly.

– Placement: on the stomach.

– Pustules on the face; scarlatina-like eruption that spreads suddenly.

Alternating redness and pallor of the skin are signs of suppurative wounds.

– A state of high fever and relative toxaemia absence.

– Feet were icy cold; the air was burning, odorous, and steaming.

– Only dry sweat on the head; fever without thirst.

– Screams aloud while dozing off. Sleep deprivation accompanied by drowsiness.

– Places hands beneath head while asleep.