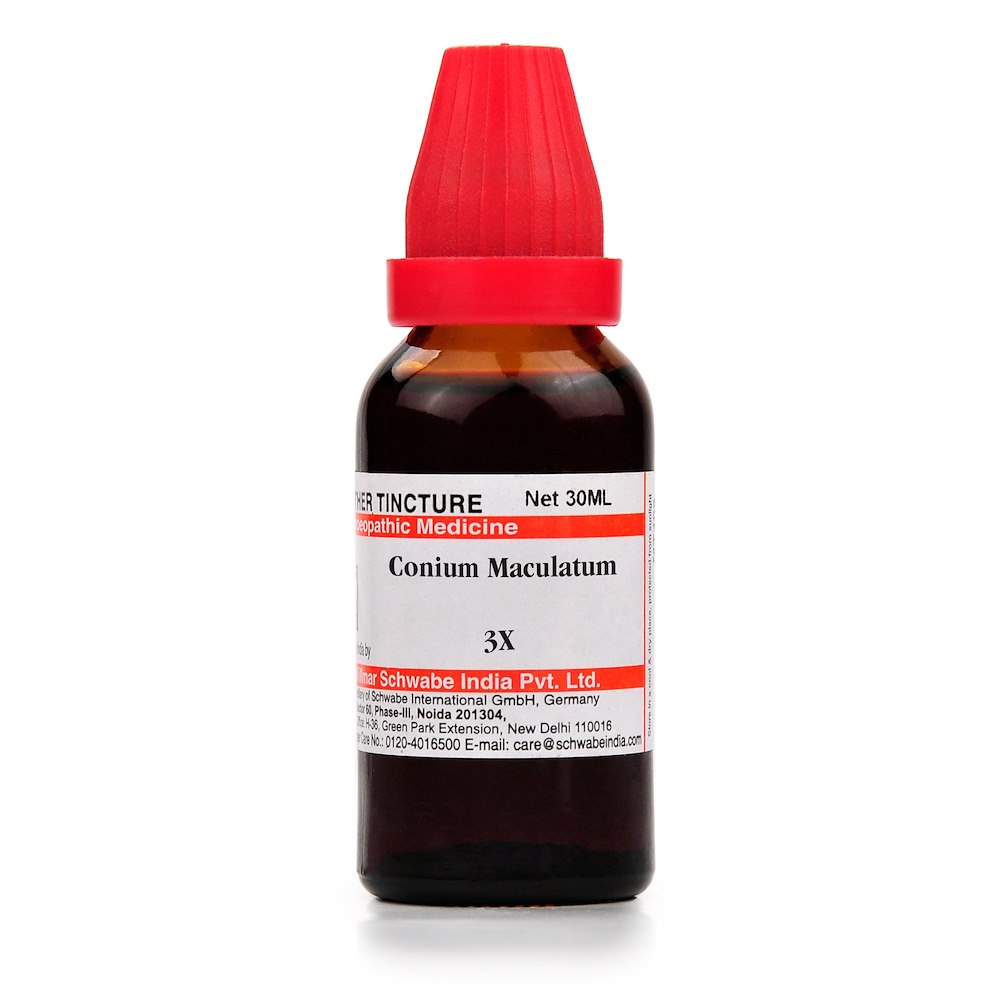 entire plant tincture at the start of flowering.

In cases of depression, conium has been used successfully.

Alcohol worsens headaches and causes a buzzing sensation, a noise, dizziness, and other symptoms.

Unable to urinate and experiencing vertigo along with sick headaches.

Conium is used to alleviate vision disturbances brought on by injury.

The remedy must be administered if the eyes are burning, particularly the inner surface of the eyelids.

Conium helps to relieve burning in the nostrils.

Tinnitus is relieved by ringing, buzzing, humming, and throbbing sounds in the ears.

Conium Maculatum helps to relieve painful upper lip blisters that are at the edge of the red portion.

The mouth feels bitter or sour after swallowing saliva.

Conium is indicated by a throaty bitter taste, a feeling of fullness in the pit of the throat, and futile belching attempts.

Vomiting followed by a cough that happens almost immediately after lying down.

Dry cough that is triggered even by raising one’s arms from bed or by the smallest amount of exposure to cold air.

When a persistent dry cough follows an illness like the flu or a cold, conium is frequently recommended.

After eating in the evening, Conium relieves severe abdominal hardness and bloating.

accumulation of earwax and liver swelling with pressive pain

Conium relieves abdominal cramping, trembling throughout, and symptoms that make you think you’re going to throw up.

When urging doesn’t work or the stools aren’t satisfactory, conium has been effective in relieving constipation.

When there is no stool, there is constant urging and stitches in the antrum.

When a patient’s bladder is unable to adequately empty its contents, conium is used.

Conium may be recommended if the prostate gland has grown larger and has caused the urethra to become narrow.

Urination interruptions are a hallmark of Conium.

Conium is indicated by menses that stop when hands are submerged in cold water.

Conium is used to check for milk oozing from the breasts after the baby has stopped eating.

The main treatment for the gland that a man’s sex has a significant impact on is conium.

Conium is used to treat scurfy pimples, such as those caused by scabies.

Over the entire body, there are itchy, brown, or red spots that appear and then disappear.

When cervical lymph nodes are inflamed and swollen, conium is a crucial treatment.

when the menses are present, the small of the back hurts, especially if it drags or draws downward.