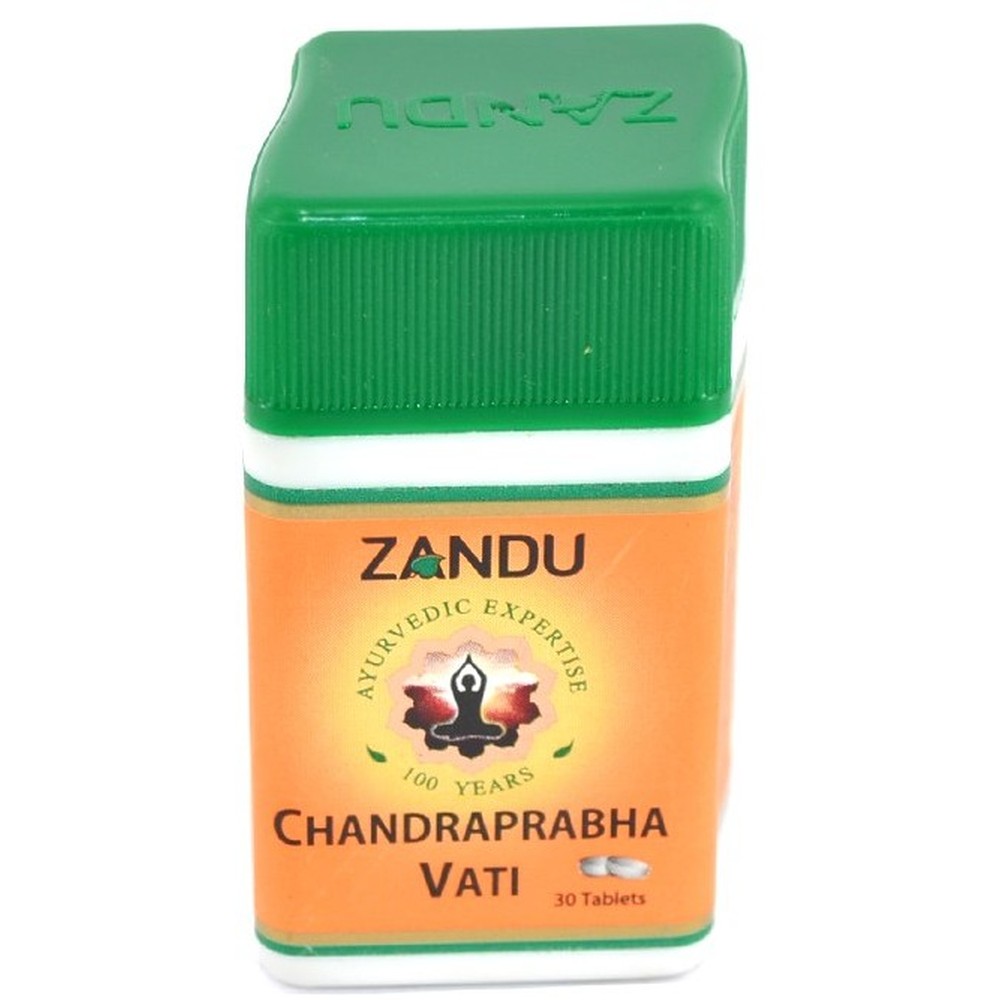 The drugs produced are especially made from the herbs produced in an organic pattern, and the herbs are produced in accordance with the GMP. Zandu is an international ayurvedic drug manufacturing plant with a large number of products, a noticeable presence both in the Indian and global markets, and a number of distinctions to its credit.

The effects of Chandraprabha Vati are attributed to shilajit and loha bhasma, which reduce fatigue and revitalize the body with a refreshing feeling. Chandraprabha Vati is used as a total health tonic and supplement for boosting physical strength and reducing general sluggishness.

Additionally, it enhances memory and assists students in reducing stress related to their studies.

Shilajit and Loha bhasma’s effects on these medical conditions may include a reduction in heart palpitations and an increase in heart rate (tachycardia).

In general, Chandraprabha Vati is used in conjunction with Gokshuradi guggul/Vati, Guduchi Satva, and Punarnava powder or Punarnavarishta for improving excretion of harmful toxins from the body, including creatinine, urea, and uric acid. It also balances the natural functions of the kidney and aids in the elimination of excess uric acid.

Since Chandraprabha Vati has strong anti-inflammatory and mild analgesic properties, it is also helpful for conditions like low back pain, spinal arthritis, and osteoarthritis of the knee.

Even though Chandraprabha Vati has mild emmenagogue effects, it can help women’s hormonal balance, which resolves issues like irregular or absent periods, light or painful periods, and other hormonal imbalance-related issues.

Because it contains ingredients like ginger, pepper, long pepper, loha bhasma, and others, it also has a mild anti-spasmodic effect that helps with menstrual cramps and lower abdominal pain.

Chandraprabha Vati works with Kanchnaar guggul to reduce the size of polyps, but other medications, such as Praval Pishti, Mukta Pishti, Mochras, Daruharidra, etc., are also necessary to stop the bleeding if bleeding is the main concern.

When combined with Ashokarishta and Kanchanar guggul, Chandraprabha Vati can remove cysts, improve ovarian function, and have noticeable effects on hormones.

Chandraprabha Vati is a great remedy for polycystic ovarian disease and is actually a tonic for the entire reproductive system and organs in the pelvis, making it recommended in every case with reproductive disorders. If it is accompanied by heavy bleeding or frequent menstruation, the best ayurvedic combination includes:

As opposed to the following combination, Ashokarishta may not be the best option if the patient has oligomenorrhea and their periods are irregular but scanty.

Agnitundi Vati may be necessary for bringing periods in some patients who do not respond well to this combination, but it should only be used temporarily and should be stopped during menstruation.

While Chandraprabha Vati does not directly affect frequent urination, it does address the root cause of the issue and aid in the treatment of urinary frequency and incontinence.

The other causes of albuminuria include exposure to heat or cold, emotional stress, fever, and strenuous exercise, among others. You also need to rule out the underlying cause and treatment should be done accordingly. In most of these causes, Chandraprabha Vati along with Kamdudha Ras works well to reduce and treat protein loss in the urine. If you are diabetic, then you should check the blood glycemic level.

In conjunction with anti-diabetic medications or the following herbal combination, Chandraprabha Vati is a potent treatment for glycosuria (the presence of sugar in the urine), and it has been shown to be effective in lowering abnormal glucose levels.

Chandraprabha Vati, when taken twice daily in a dosage of 1 gram, lowers blood urea, uric acid, and serum creatinine levels, as we have discussed in the context of gout.

Polycystic kidney disease is helped by Chandraprabha Vati and Kachnaar Guggul; the effects start to show after a few days.

In addition to drugs, the use of spermicidal jellies, feminine hygiene spray, catheterization, and other factors, cystitis, or inflammation of the bladder, is frequently brought on by urinary tract infections (UTI).

In addition to Chandanadi Vati and Chandanasava, Chandraprabha Vati is effective for reducing all the symptoms of cystitis, including cloudy urine, foul-smelling urine, frequent urination, burning, or pelvic discomfort.

1 to 2 tablets, once or twice daily, with or without food, or as prescribed by an ayurvedic physician.